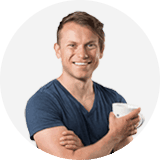 You know me, I'm a bit of a bulldog. Once I've sunk my teeth into a manufacturer, I don't let go. For better or worse. Jura hasn't had an easy time of it so far. That's because I generally find the Swiss brand's coffee machines pretty meh. 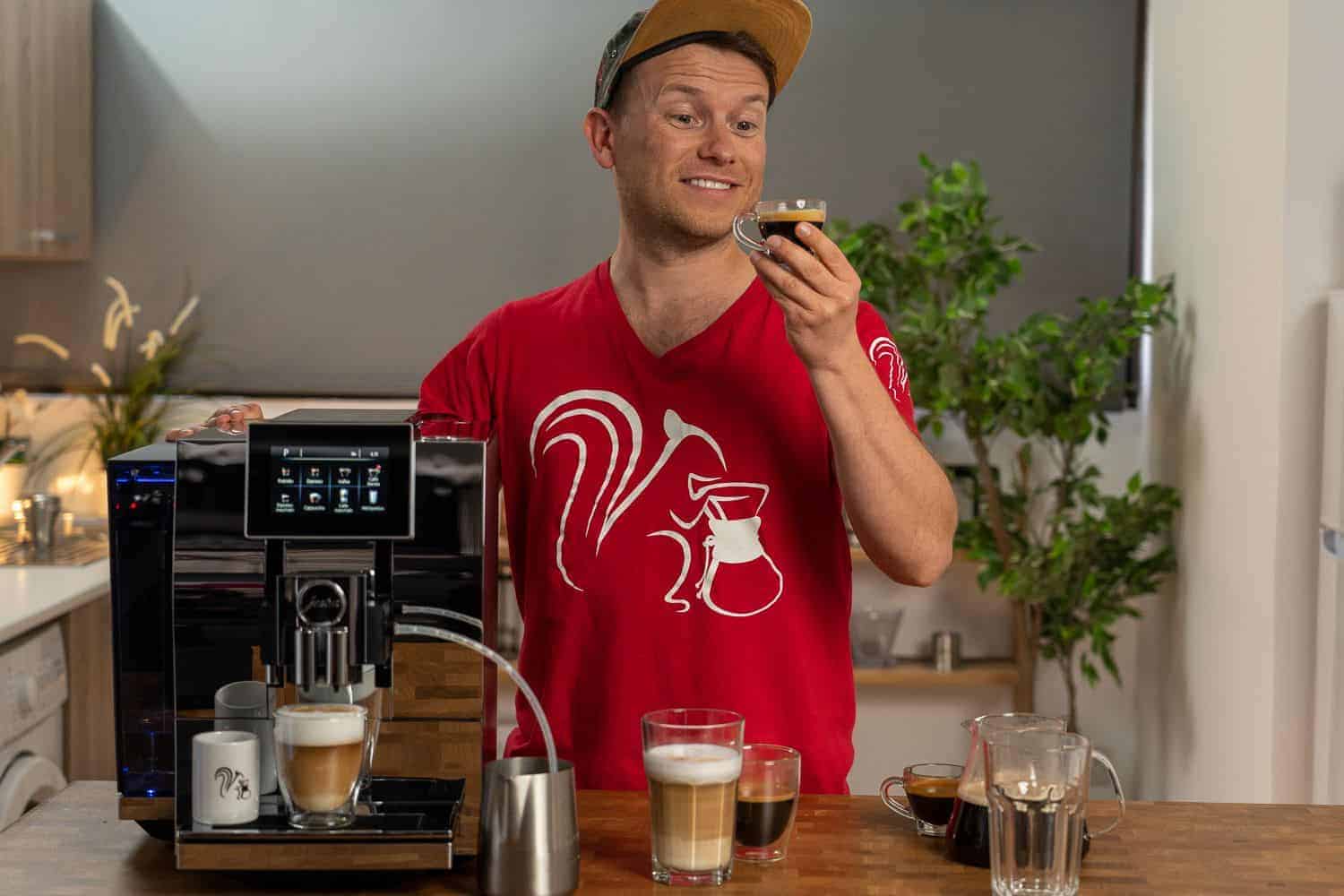 You know me, I’m a bit of a bulldog. Once I’ve sunk my teeth into a manufacturer, I don’t let go. For better or worse. Jura hasn’t had an easy time of it so far. That’s because I generally find the Swiss brand’s coffee machines pretty meh.

They are pretentious machines with an pretentious price tag and have no real added value over other brands. Aside from that fabulously pretentious design, of course.

The biggest drawback is the fixed (i.e. non-removable) brewing group. Jura can try as much as they like to spin me their yarns about sophisticated hygiene systems that make this key component practically self-cleaning. I say, tell me another one. If you can’t remove it, it stays dirty. Period.

High-end for the highbrow.

Best black coffee from a super-automatic

No milk jug in the box

Whatever possessed me despite all that to shell out an eye-watering $4,400 (August 2020) for the Jura Z8 so that I could review it for you? But I’m glad I did.

It probably had something to do with the game-changing DeLonghi Maestosa, which was an absolute blast to review. With its innovations, that super-automatic espresso machine easily earns its positioning at a similar price point.

Unfortunately, the video is only available in German.

So, is the same true of the Jura Z8? Well… Let’s just say there’s a reason the video is unusually long and its title ends with a question mark (Jura Z8 Review | The Best Super-Automatic Espresso Machine on the Market?).

The Big Picture: You've Got to be Kidding?!

Before I bombard you with all of the Jura Z8’s undeniable advantages, let’s briefly address the elephant in the room:

This FOUR-AND-HALF-THOUSAND-DOLLAR super-automatic espresso machine only has a pathetic hose system for frothing milk.

For the most part, I’m a fan of cappucinatore systems because you can pop the milk hose into any container you choose and ideally, there’s less to clean up afterwards.

You’d think that if every bargain basement super-automatic machine for around a 1,000 dollars comes with some kind of milk jug thrown in, the princely Z8 could match that three times over? 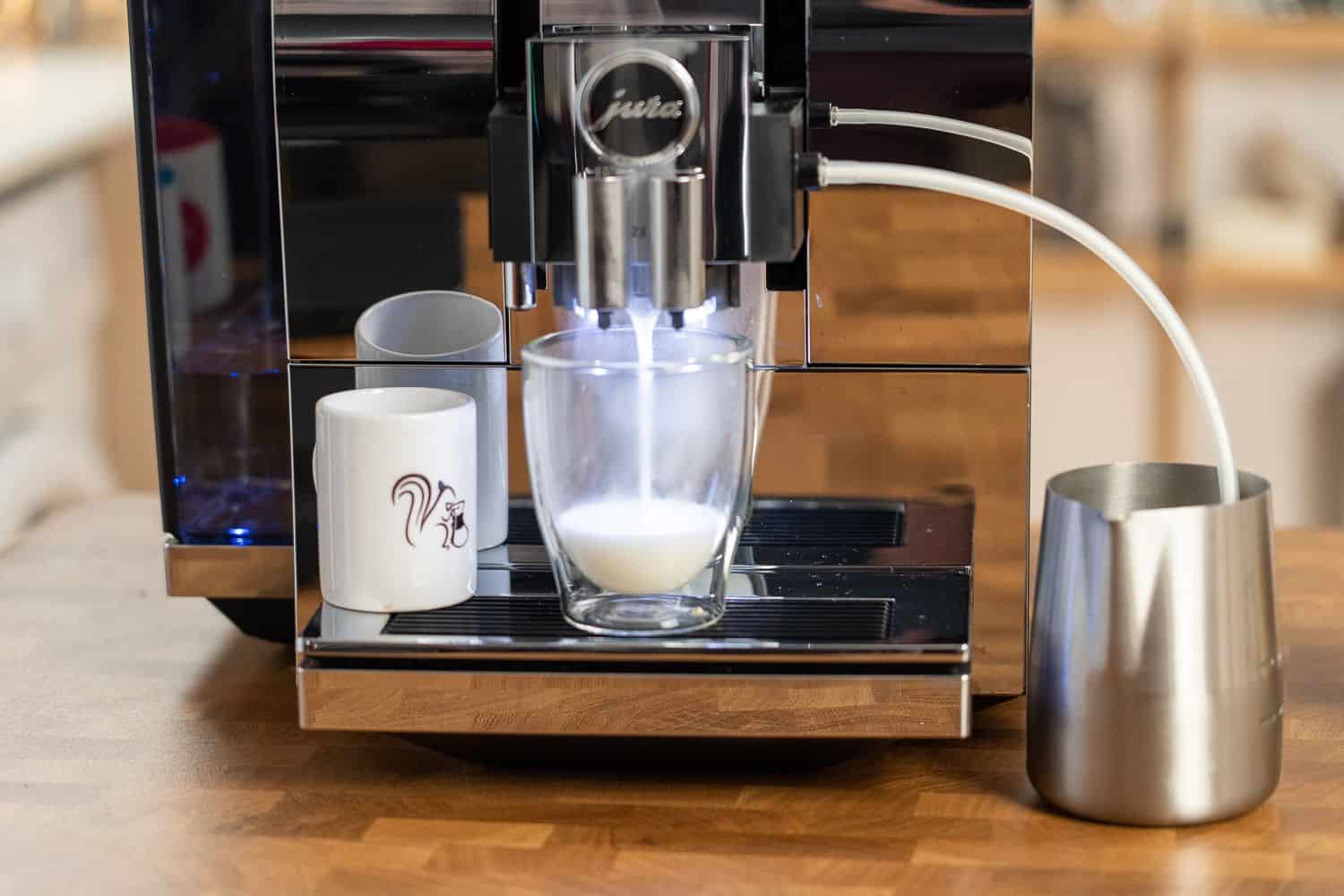 Of course, you can also blow roughly $300 to get the Jura “Cool Control” jug. Jura definitely missed the memo on that one.

All that aside, my model with the aluminum-chrome look seriously delivers. Of all its many advantages, these are the ones I consider the most decisive:

In the video, I only use the app and I’d say you should get by just fine using that on a daily basis. It’s very clear, idiot-proof and always lets you know exactly what your super-automatic Tamagotchi needs: “Clean me! Empty me! Fill me up! While it’s not slick, it’s also no mere gimmick.

To get to 21 “specialities,” Jura counts double shots and varying water temperatures for tea as separate options. Other notable items on the list are the coffee pot function for the “quick cup” devotees, hip drinks like the flat white and various “Barista” creations. No idea what those are supposed to be. But they sound super-impressive and to feed into the more-is-more advertising logic. 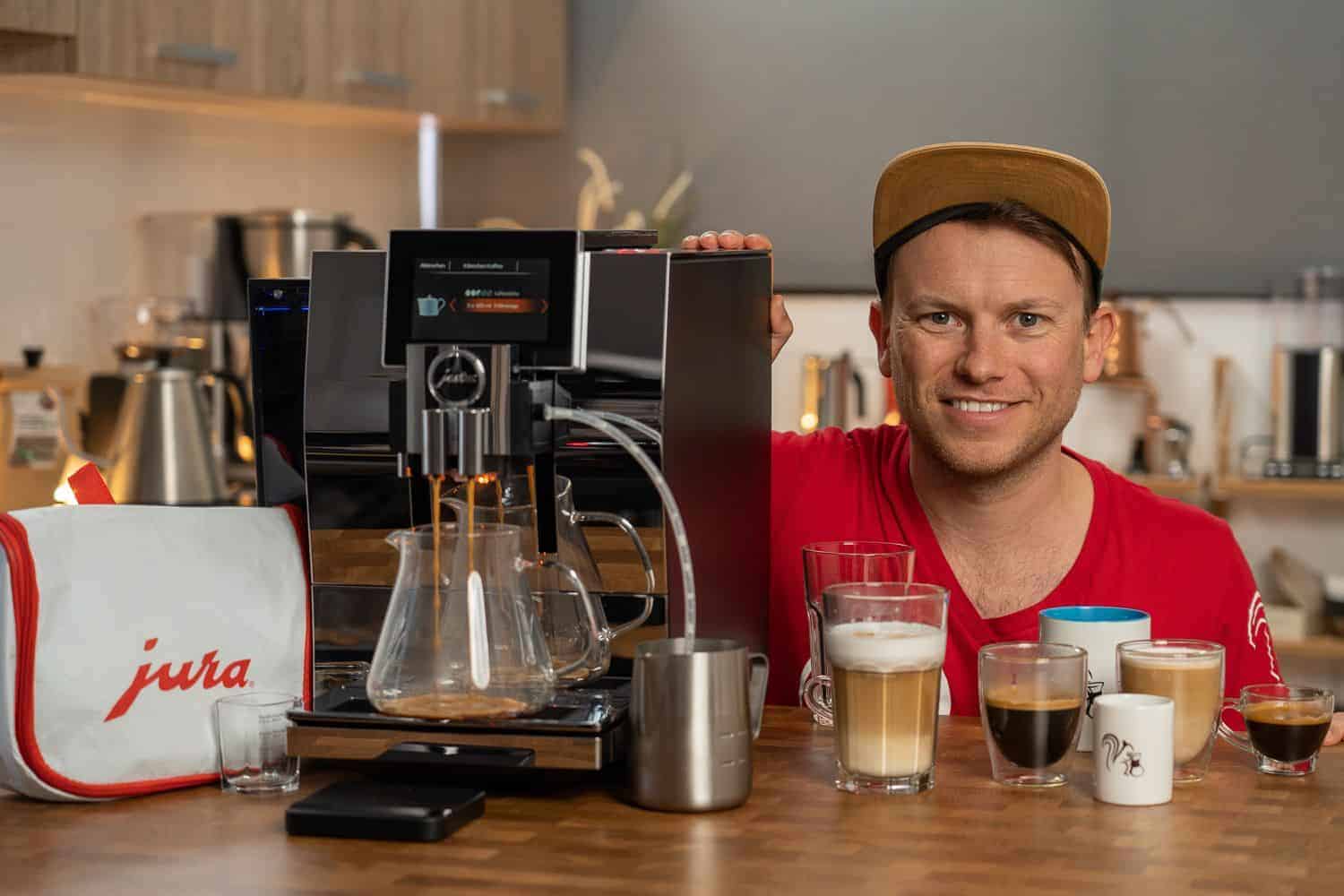 My advice to Jura: Focus on the range of settings for the various drinks. Because the Swiss brand has really gone all out in that department:

Each of these points clearly justifies the price of the Jura Z8. Three to five levels for each of these settings are standard. And on top of that there’s that rare treasure – a stepless grinder. 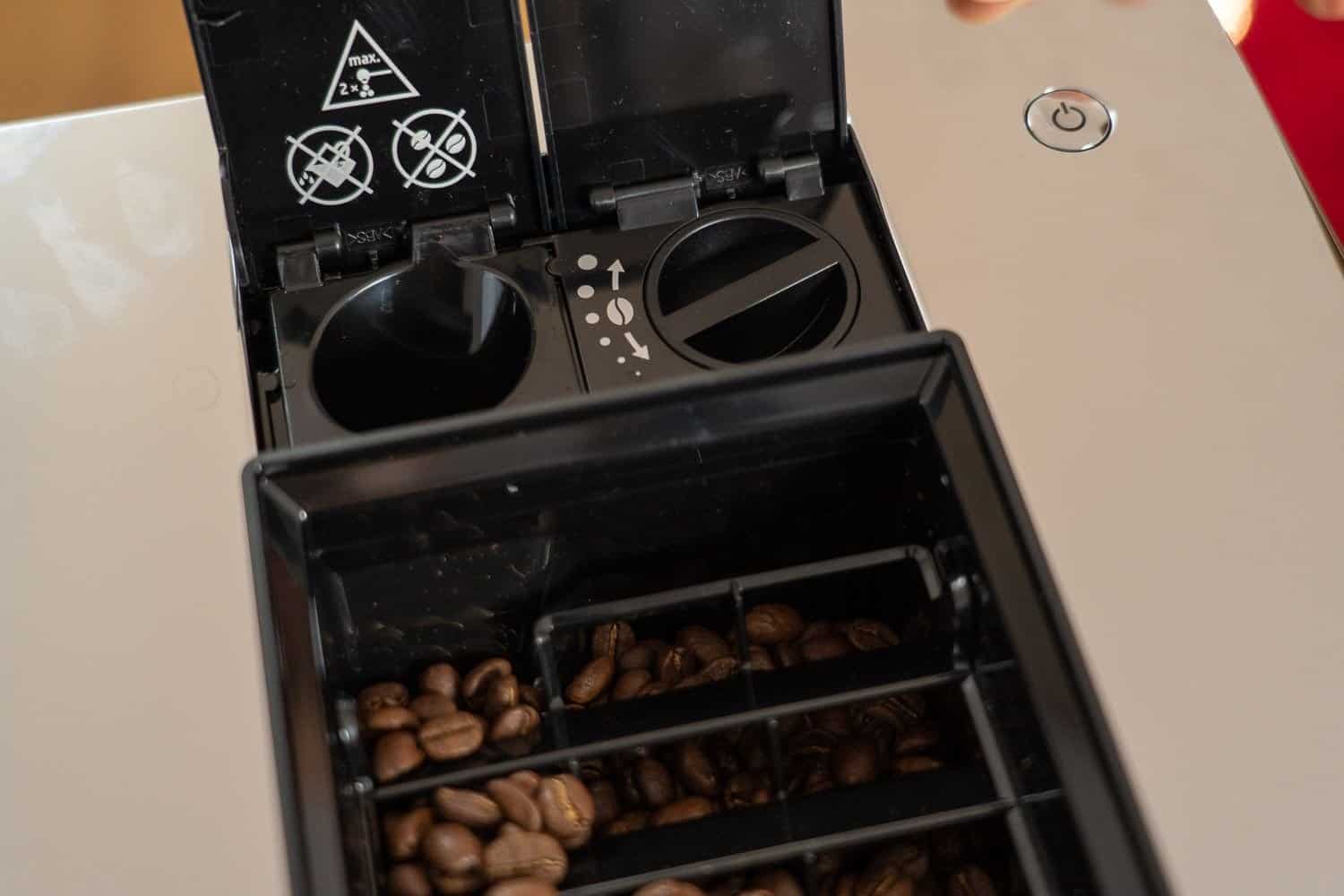 As always, I’d be happy to skip the dumb distractions – such as light shows, powder chutes for ground coffee and pointless marketing waffle. None of which detracts from what’s good, solid functionality wrapped up in exceptionally high-quality packaging. Or, as Jura puts it:

The grooved water tank and the chrome-plated coffee spout accentuate the sculptural design. 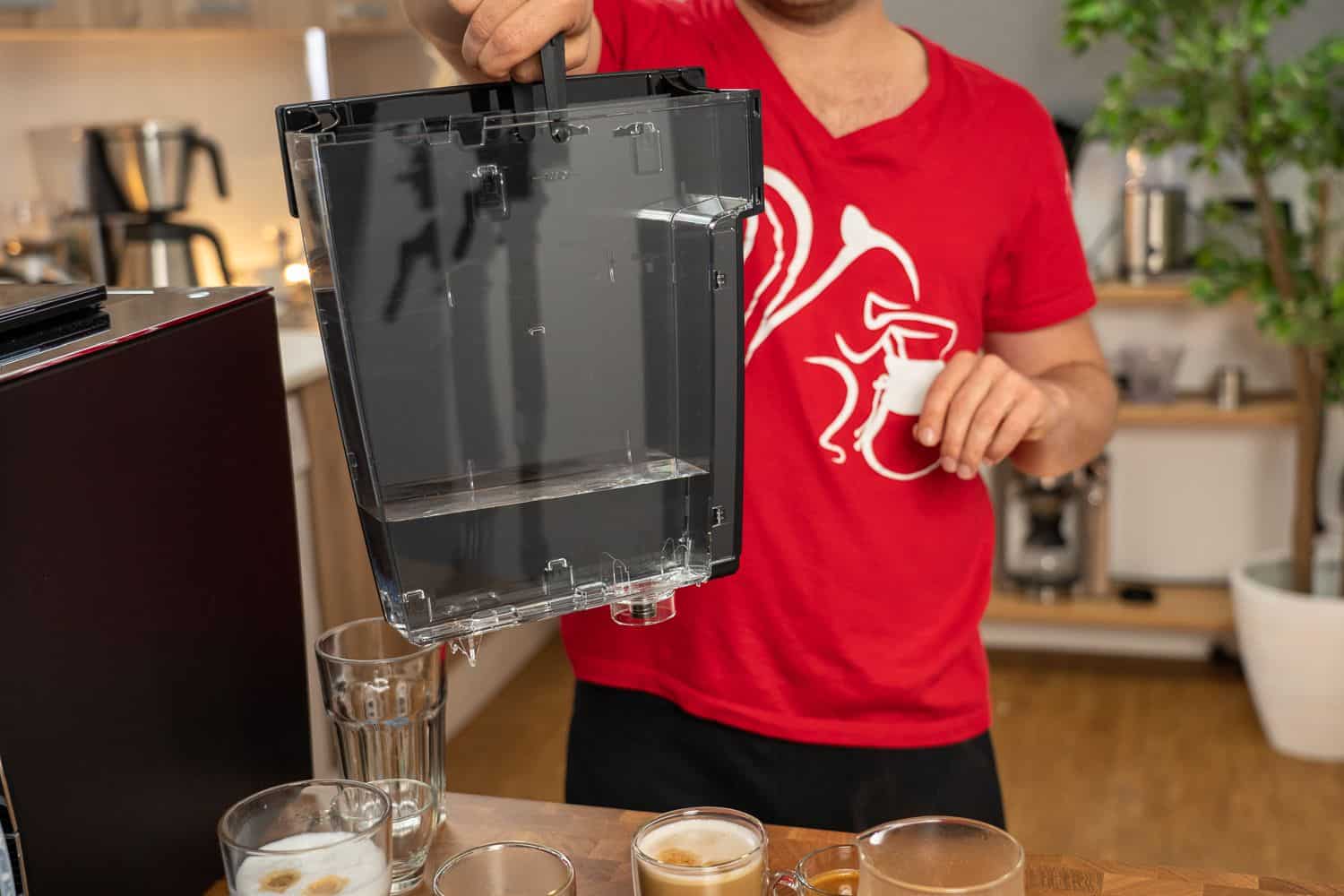 Programming the Jura Z8: Do it Your Way

Whether the sexy app, sexy touch display or a sexy old-school rotary switch is more your style, the choice really is yours when it comes to operating the Z8. Each of these options works intuitively with no “huh?” moments.

Sure, it’s worth looking through the user manual when taking the first steps with your new machine. But anyone who has ever used an app or a computer before will be right at home this super-automatic espresso maker virtually from the get-go.

A puzzling feature of the Z8 is something that I also noticed on the DeLonghi Maestosa: Milk froth volumes are measured in seconds. Why? Maybe because seconds are just more refined than boring old ounces. That, or a programmer was asleep at the keyboard.

As for the grinder, a hunt for information about its materials only turned up this in German:

The JURA GIGA is equipped with ceramic grinders. The grinders on all other JURA super-automatic coffee machines are made of hardened steel. Heating system parts that come into contact with water are made of stainless steel.

Either way, the thing works quietly and consistently. As always, set it finer from the start. And if your coffee doesn’t seem quite right, make sure it’s the first thing (!) you adjust. 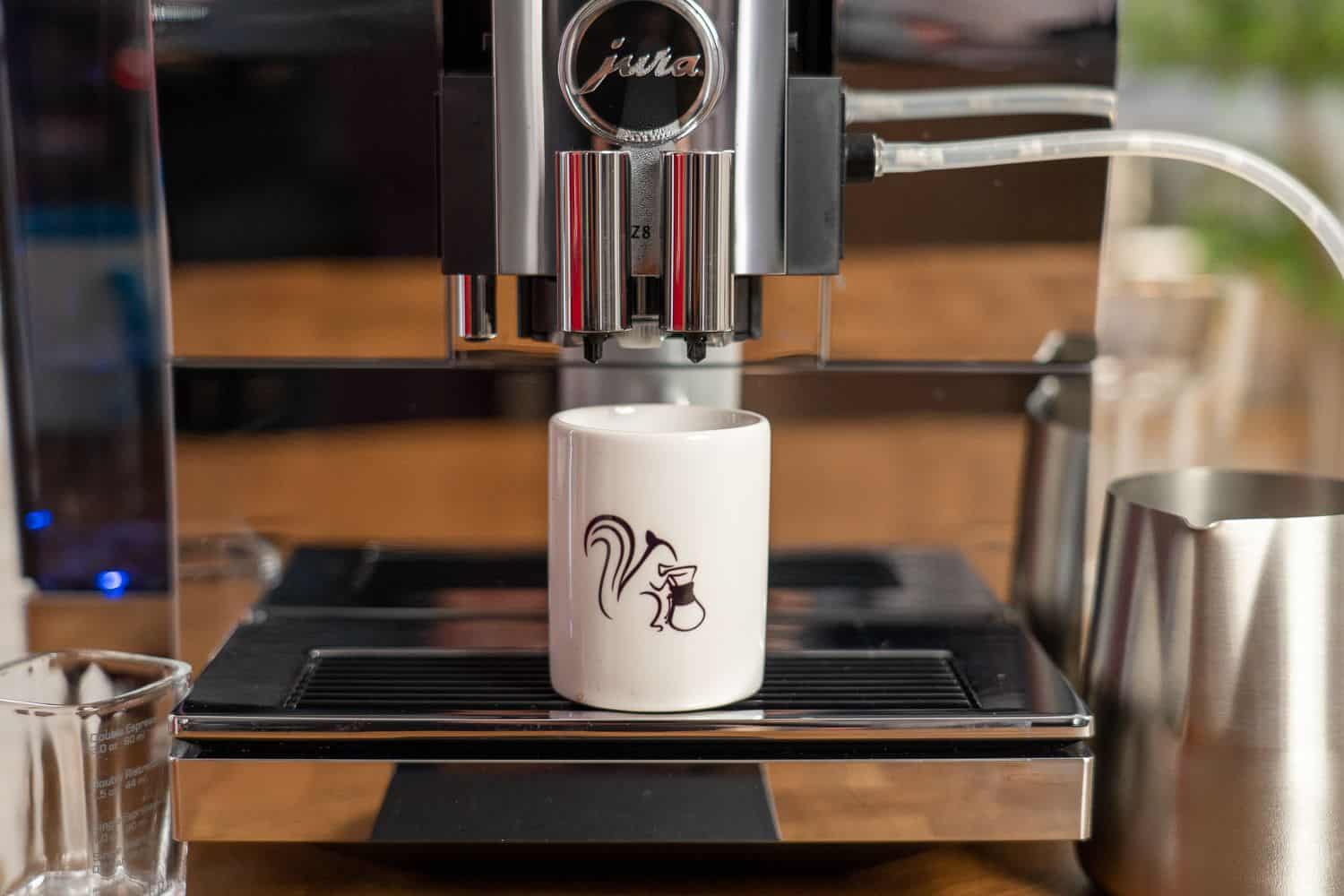 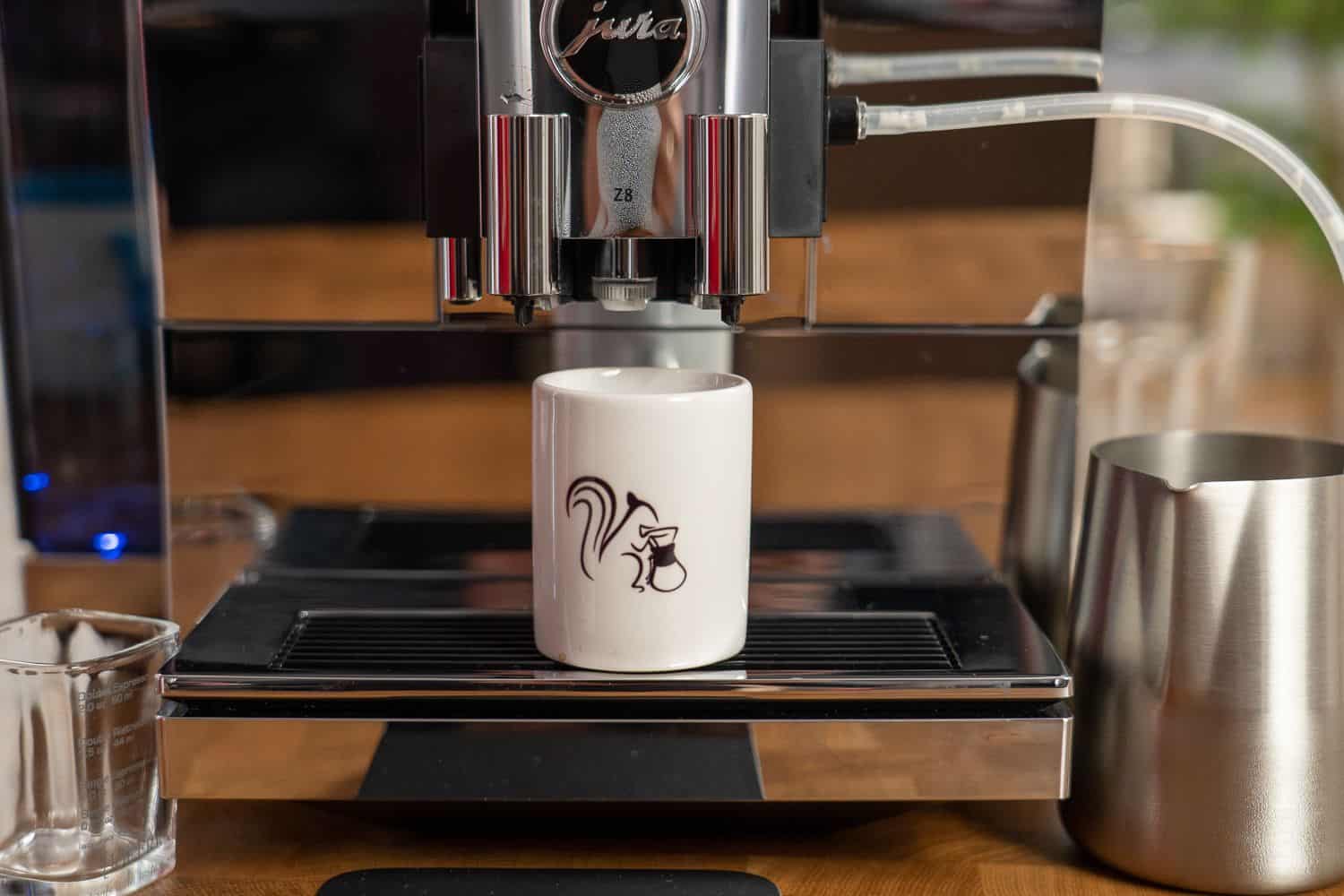 And that’s about all there is to say about the settings. Which tells you just how easy working this super-automatic machine is.

Coffee Drinks from the Z8: Now, You've Got my Attention

In the Jura Z8 video review, I took the unusual step of preparing practically all the main types of drinks. That’s because I’d already figured out in my own advance testing that the Z8 makes coffee to die for. 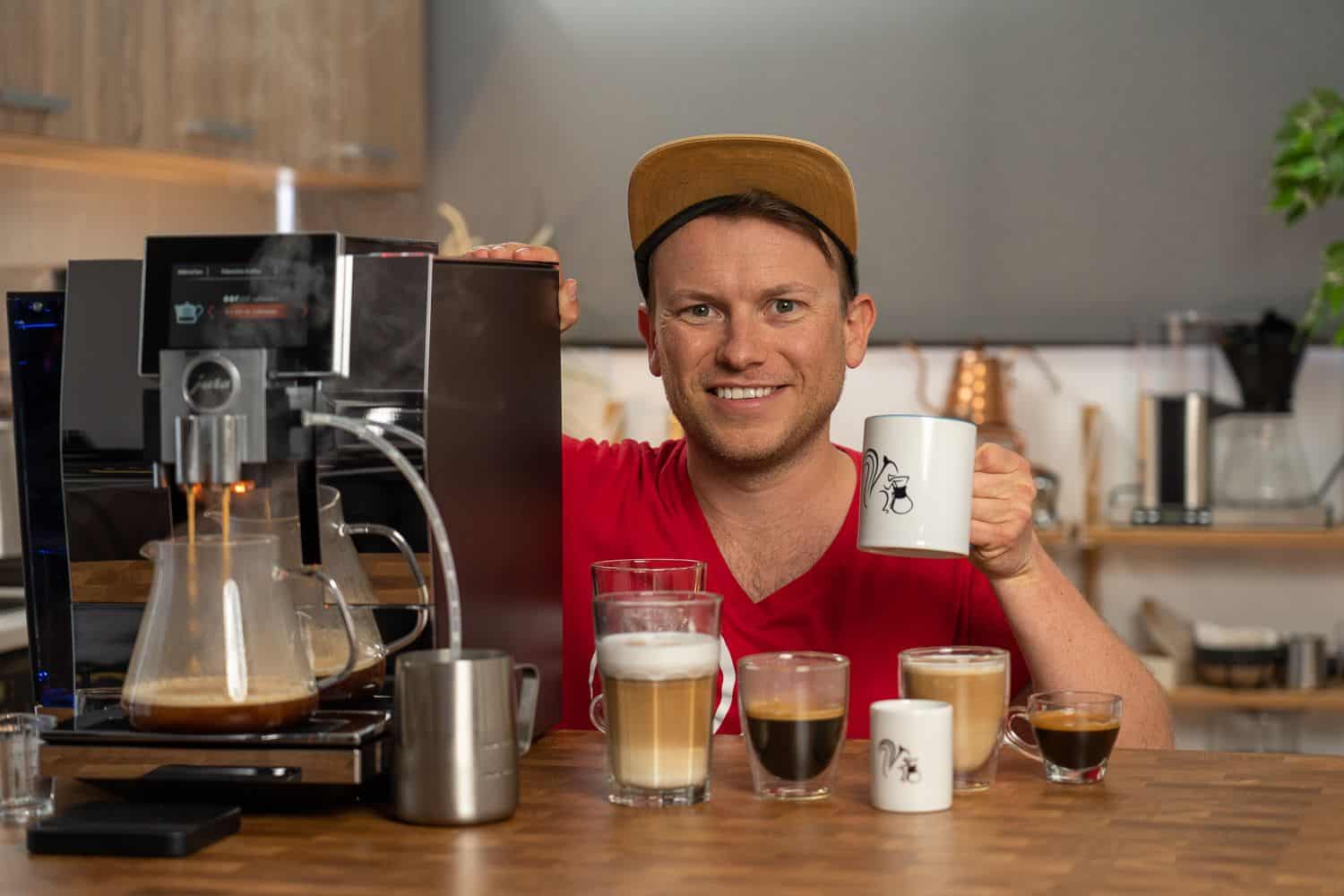 As bit of an old grump, I can’t help myself when it comes to faultfinding. So here goes:

(1) In my opinion, the ristretto is a better choice than espresso (if you want espresso)

The whopping crema on the espresso looks suspiciously like the fudged results you get from entry-level portafilter machines. There, double-walled baskets are a cheat for producing a fat layer of crema. All because for years, the industry has preached that this is the hallmark of quality espresso. 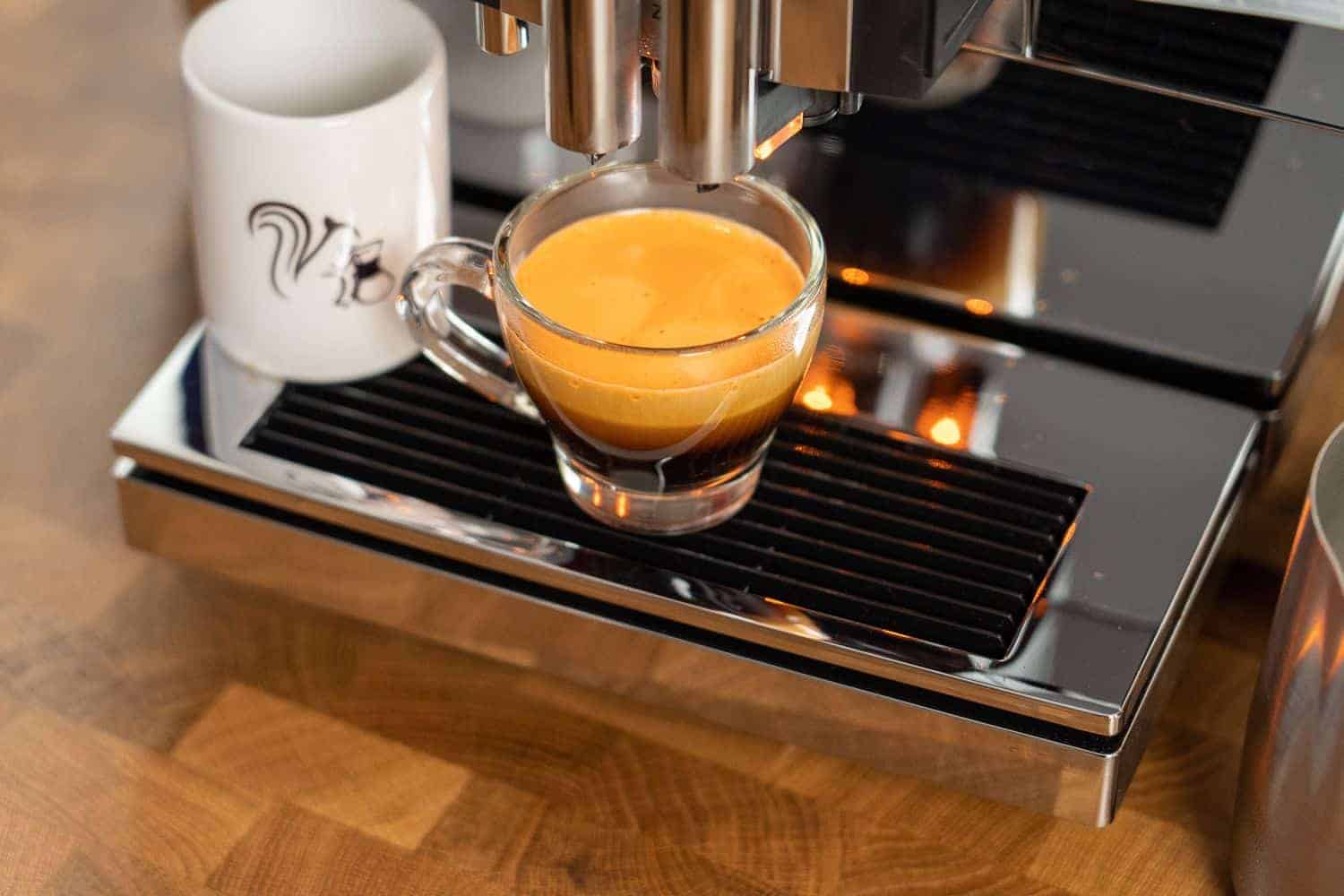 The crema on the ristretto is far more realistic – especially considering that a super-automatic machine can’t actually produce the genuine article. Overall, the ristretto feels more balanced and the extraction cleaner.

Drumroll please: The “ordinary” coffee from the Z8 is probably the best I’ve ever had from a super-automatic machine! Seriously.

Even though it’s still a far cry from the sophistication of pour-over coffee, it’s surprisingly delicate. Body, character and flavor are off the charts in their own right. Although in final analysis, this is simply great beans. With a taste like that, I’ll take it.

The pot function brings you back down to earth. This is despite the fact that the Z8 not only does a commendable job of sending more water through a single puck but also repeatedly starts over with fresh coffee grounds. 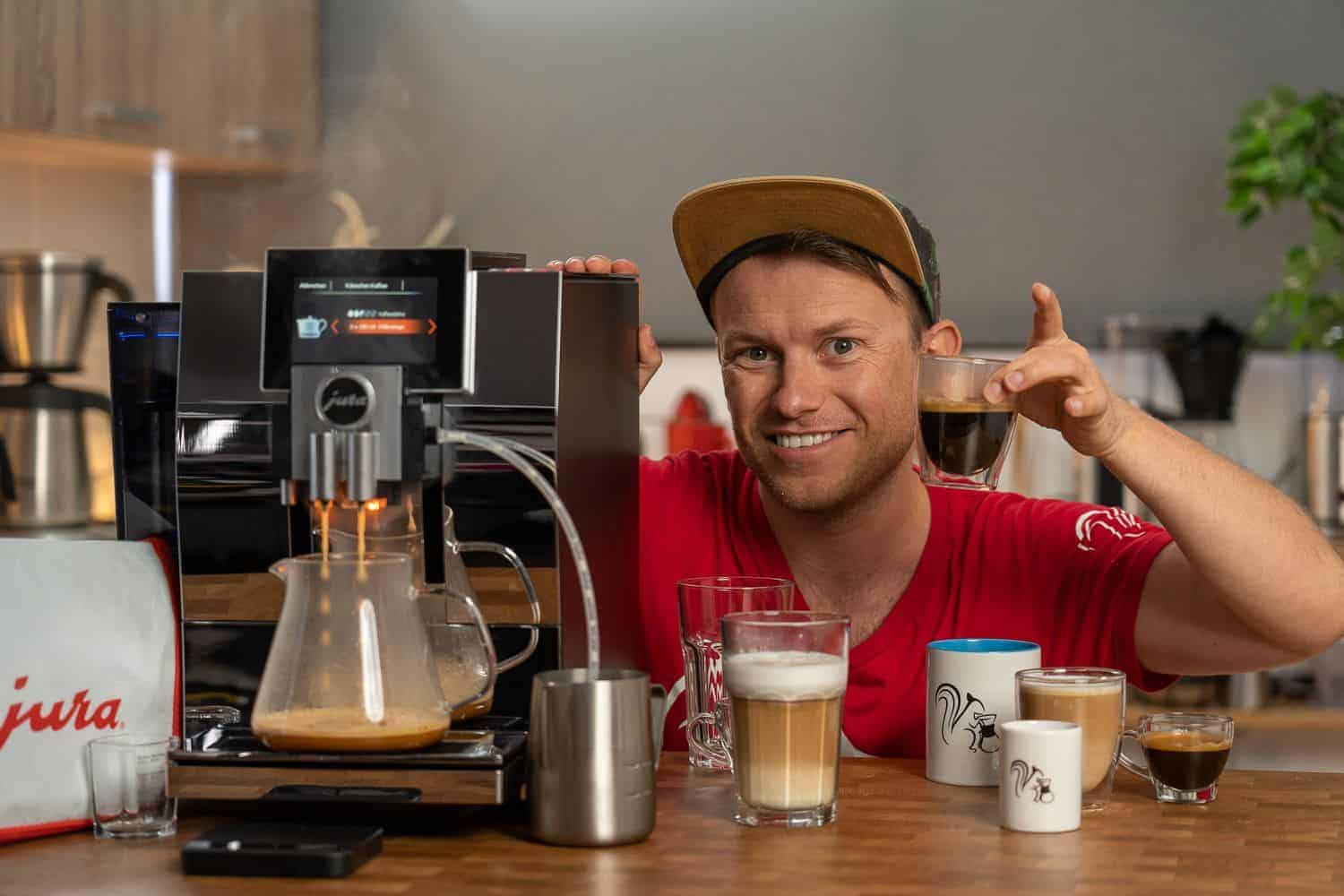 Somehow the pot’s brew still tastes rather thin. Admittedly, I’d have been very surprised if a super-automatic had succeeded in delivering both volume and full flavour. Which could well spell the demise of drip coffee machines. Looks like that’s a way off yet though.

Looking at the big picture, from temperature, to setting options and all the rest, the Jura Z8 gets an A+ for its coffee drinks.

And that goes for the temperature and consistency of all the specialties with milk or froth, too.

What I especially like is that the Z8 tweaks the automated processes behind each drink so as to better reproduce its key characteristics. 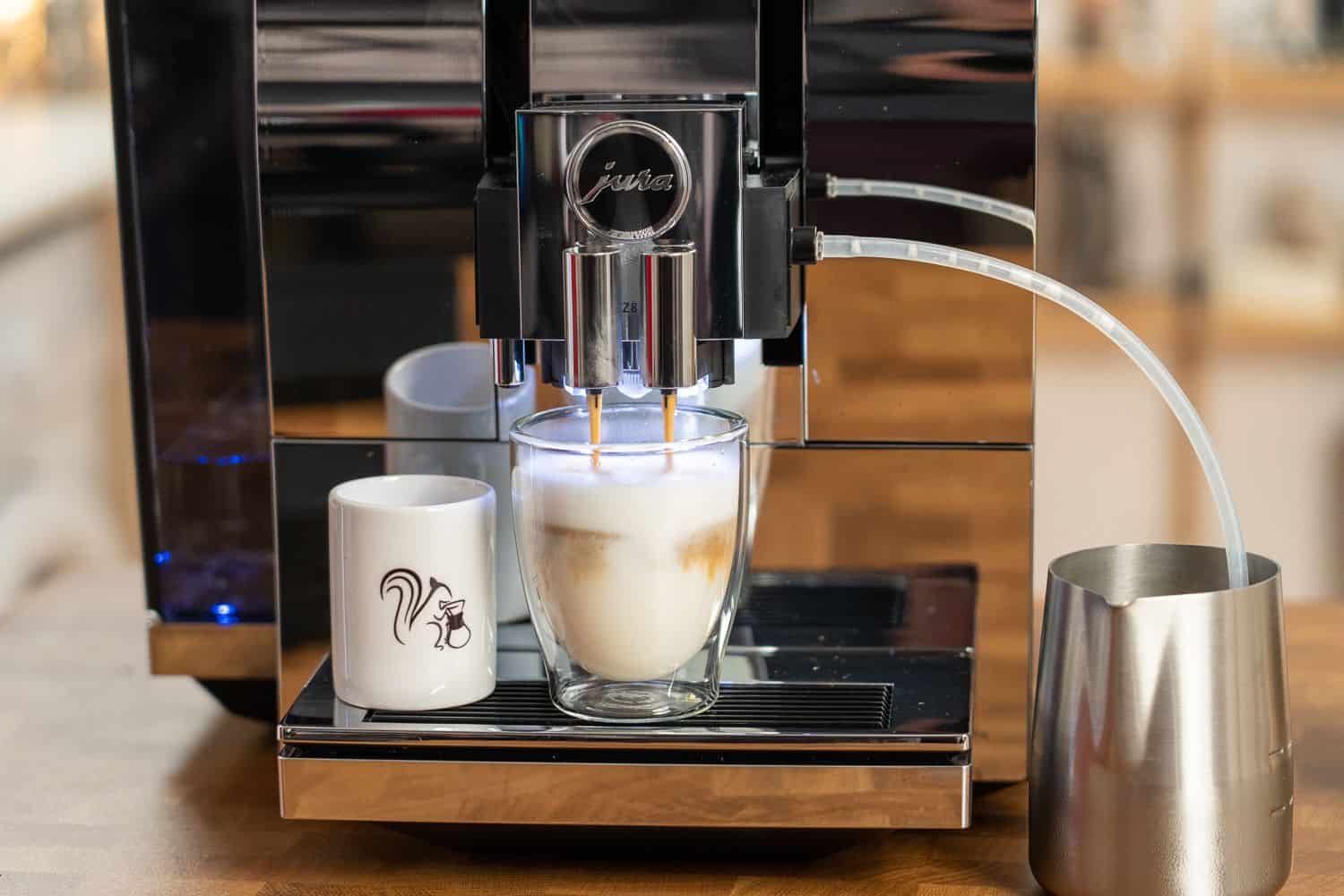 To make a latte, for instance, coffee and a light froth are poured into the glass at the same time. For a latte macchiato, however, there is a deliberate pause between dispensing the milk that allows the froth to settle and form a clear layer. 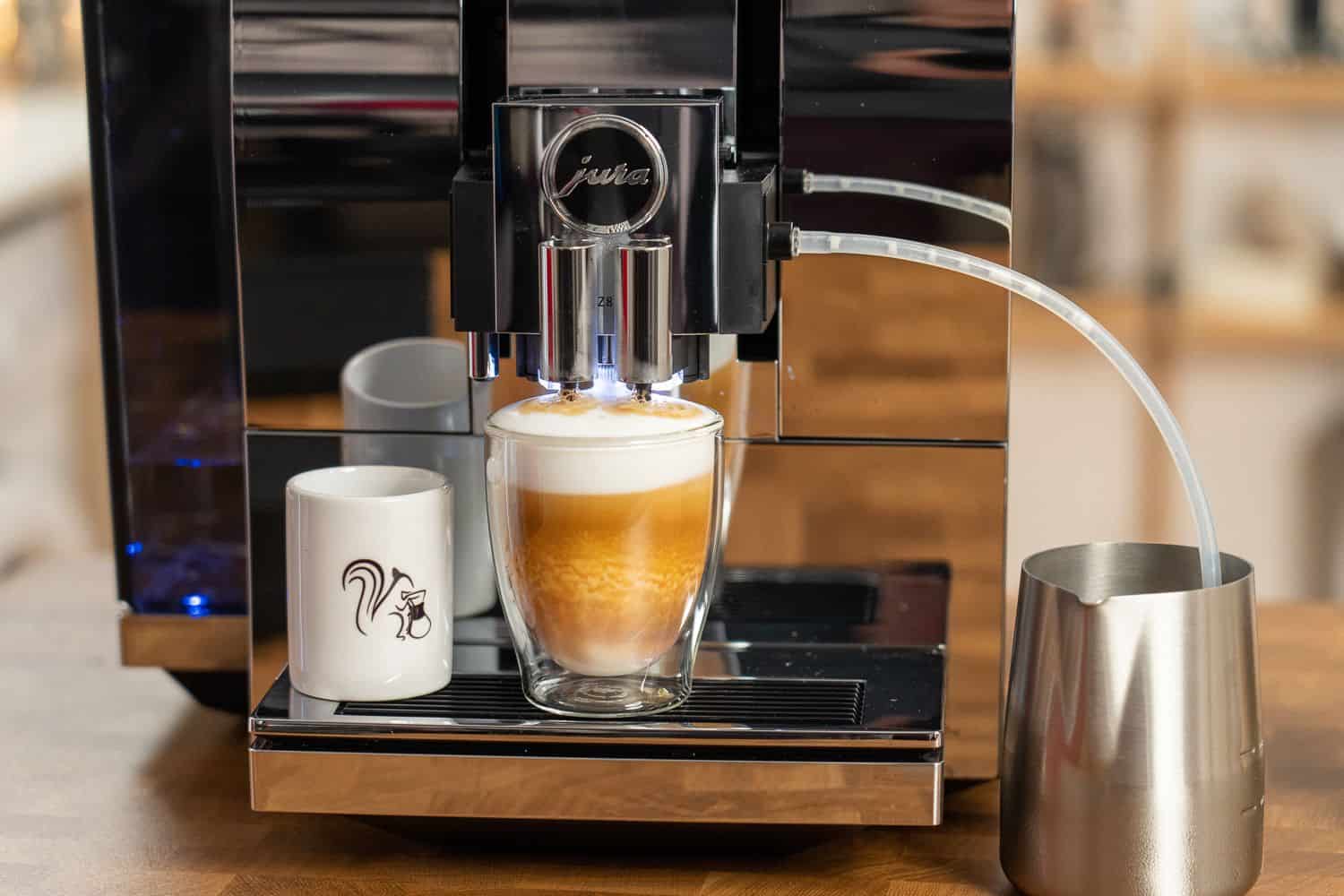 Even the flat white looks good. Although this incredibly precise drink is something of a stretch for the Z8, as it is for all super-automatic machines. Still, there’s no question that the “fine foam technology” does a first-rate job, producing soft, velvety microfoam rather than something more like bubble bath.

As I’ve said before, those who like milky drinks should collect a bunch of cups and do some tests to find out what the “seconds” equate to in volumes. Even after putting the Z8 through its paces, I’m still not sure. How about you?

To clean or not to clean the Z8, that is the question

With my caffeine levels hitting overdose in the video, you’ll have to forgive me for forgetting to mention my argument against buying a Jura: The brand’s brew groups are still not removable, so thorough cleaning is impossible.

I know, I know, Jura repeatedly flushes the thing with water heated to 176°F. Which is of course great. But how do you get water into all of the component’s nooks and crannies without flooding the machine?

On the other hand, Jura’s sporty accessories bag comes with everything you need for cleaning and polishing your super-automatic machine – including a microfibre cloth for buffing up the chrome surfaces. 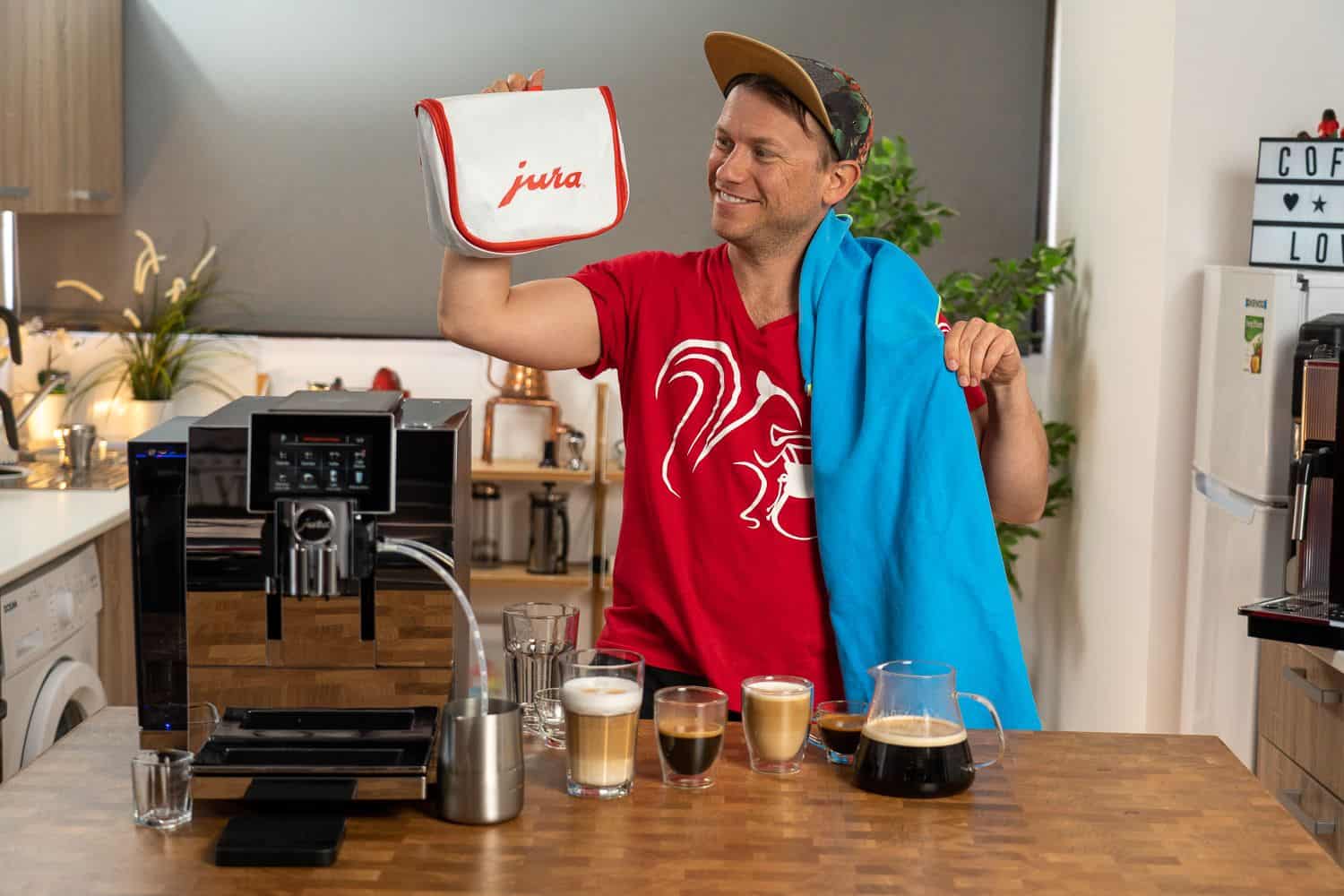 As with preparing drinks, the appliance’s various displays walk you through exactly what to do to clean the milk system or descale, for example. 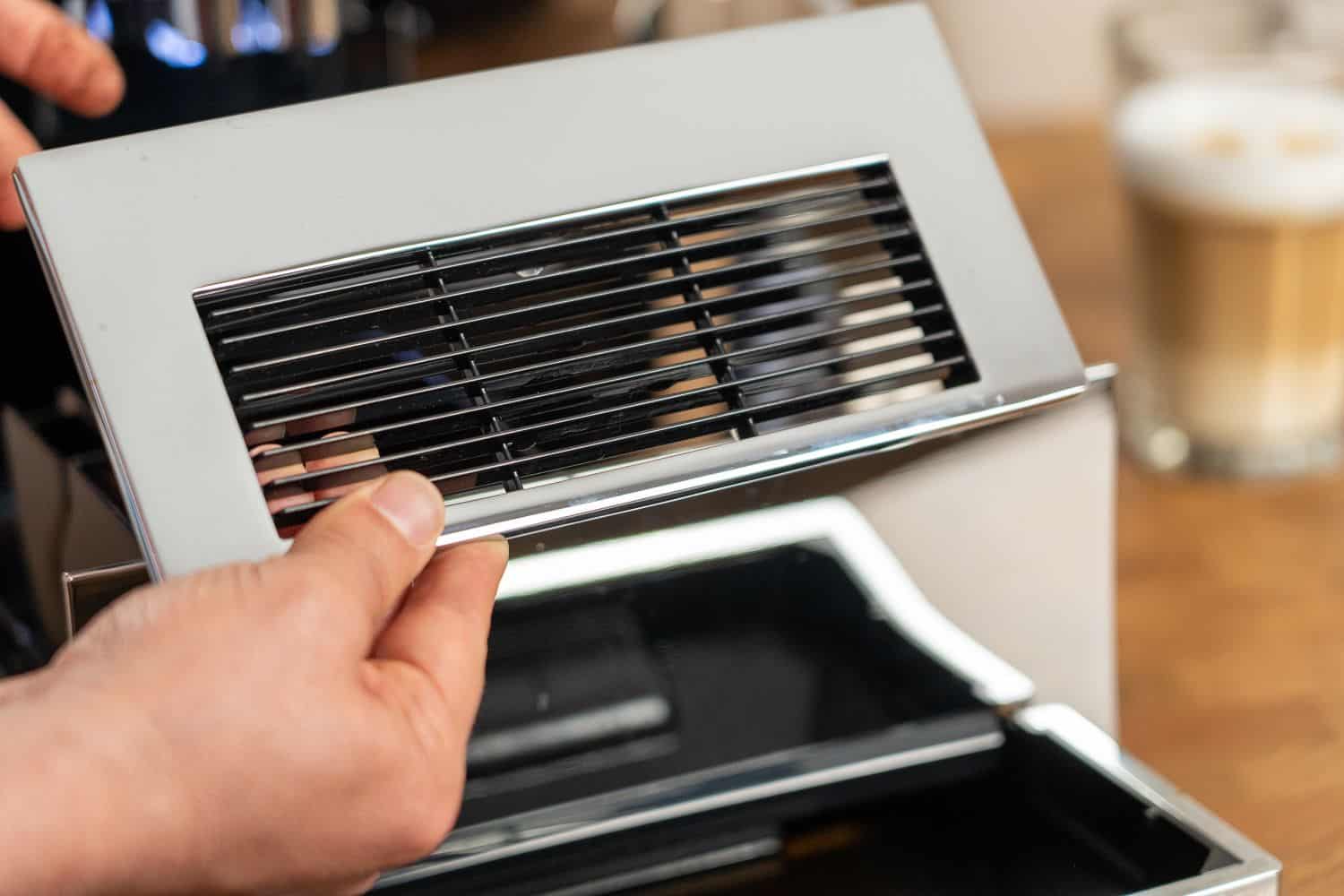 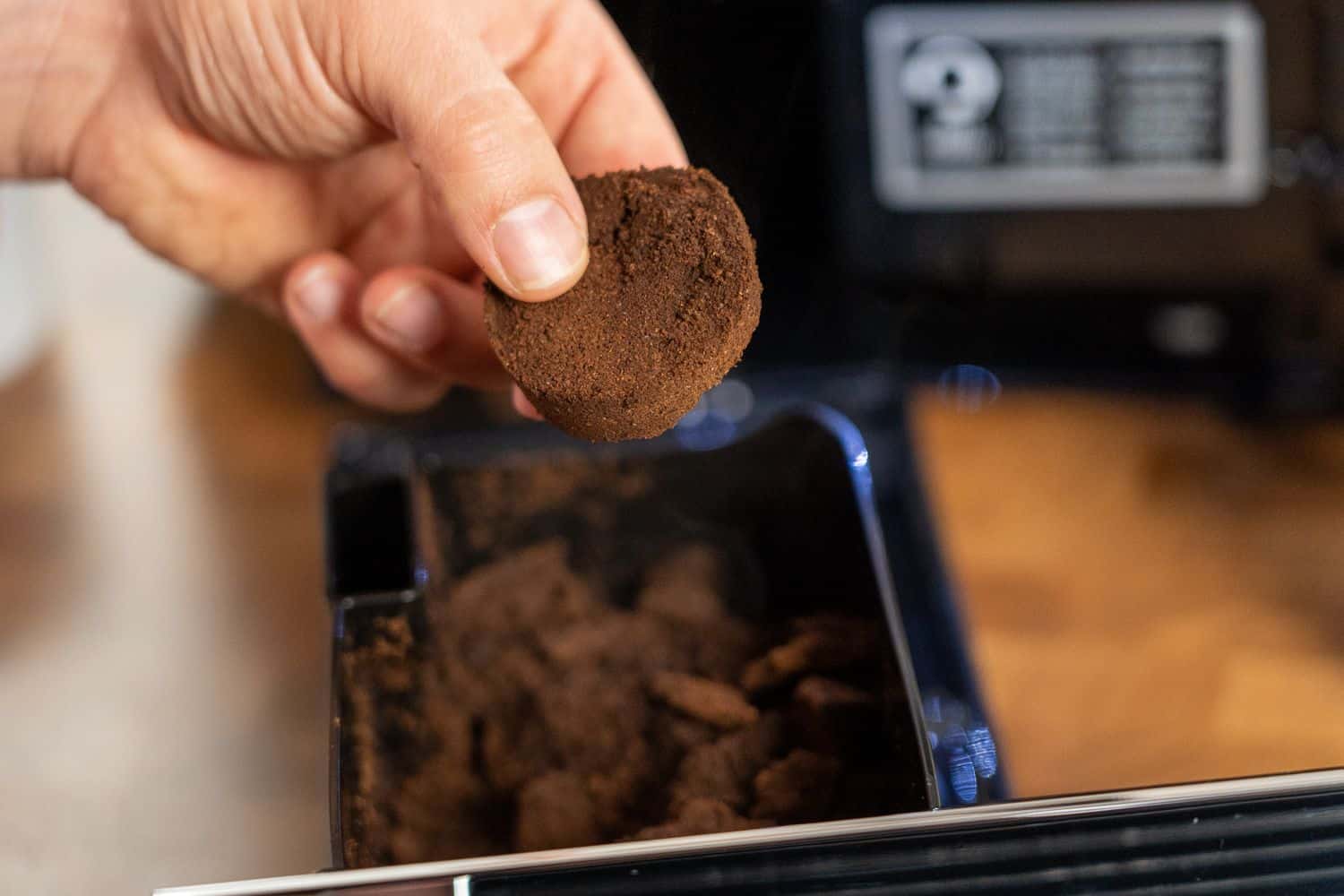 I really can’t fault the automated cleaning. Especially as many important parts can only be removed from the front. Obstacles to my usual list of hands-on checks – e.g. removing the brew group – are still a (small) negative.

By the way: With a capacity of over 81 fluid ounces, the water tank is almost oversized. But if you make a lot of coffee, as in an office situation, you’ll get through that pretty quick.

Those who drink less should be careful not to fill the tank too much, empty it at the end of each (!) day of use and let it dry out. Otherwise you’re creating a lovely moist environment for all kinds of stuff to grow.

Verdict on Jura Z8: Is it the Best?

Much like the Maestosa, I think there’s little point trying to compare the Jura Z8 super-automatic espresso machine to other coffee makers. This high-priced Rolls Royce is in a class of its own and really surprised me in the best possible way.

High-end for the highbrow.

Best black coffee from a super-automatic

No milk jug in the box

With my video review all wrapped up, I’m asking myself which machine has the upper hand in this clash of the titans – the Z8 or DeLonghi Maestosa?

The Maestosa is all about innovation – you get two separate electronic grinders and an extremely beneficial collection of settings. 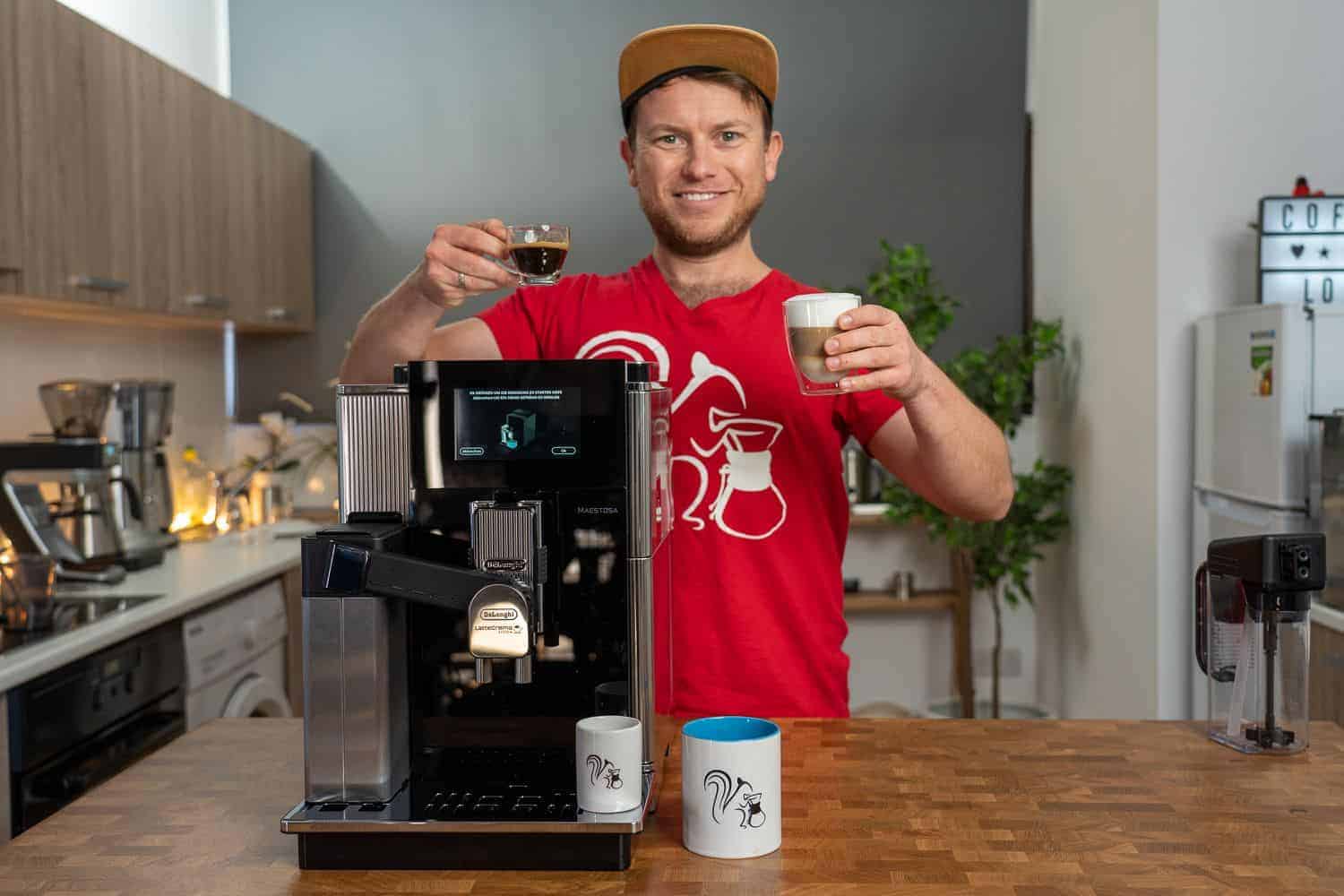 In contrast, the Jura simply has an extreme number of settings, a huge swank factor and user friendliness by the truckload. Plus, I generally prefer the taste of its coffee.

The takeaway is that these two machines are aimed at different target groups. The Maestosa is for early adopters; the Z8 for quality lovers. Both groups have to be well heeled but are rewarded for their investment with real performance.

I’d love to hear what you think of my super-automatic espresso machine comparison review. Please be sure to leave a comment!